Ranching for a Small Planet

I recently read an article by renowned author and environmentalist Frances Moore Lappe, titled Farming for a Small Planet. Lappe is well known for her groundbreaking book, Diet for a Small Planet, where she advocated a plant-based diet, sourced from local, small farms.  In her article, she correctly warns against multi-national corporations controlling our food supply and debunks the myth that in order to feed the world, we need industrial-scale agriculture that ignores the health of communities and soil.

Unfortunately, Lappe’s bias against animal agriculture misses some pretty major components of a healthy ecosystem, mainly that manure is a natural fertilizer, that hooves gently aerate the soil and break down dead plant material, and that grazing can enhance the rate and capacity of the land to photosynthesize sunlight and carbon dioxide, creating rich biodiversity under our feet, less carbon dioxide in the atmosphere and more water holding capacity on our ranches.  Win, win, win!  In the article she states, “The seed market, for example, has moved from a competitive arena of small, family-owned firms to an oligopoly in which just three companies—Monsanto, DuPont, and Syngenta—control over half of the global proprietary seed market. Worldwide, from 1996 to 2008, a handful of corporations absorbed more than two hundred smaller independent companies, driving the price of seeds and other inputs higher to the point where their costs for poor farmers in southern India now make up almost half of production costs.[10] And the cost in real terms per acre for users of bio-engineered crops dominated by one corporation, Monsanto, tripled between 1996 and 2013.”

These are the same companies that grow the majority of the world’s soybean crops, the main ingredient in tofu, soy burgers, a whole list of other plant-based proteins , and a likely foodstuff input for “fake meat.” There is a solution to this monopoly of large corporations controlling the world’s food supply, but it’s not to avoid meat, much less to eat it out of a petri dish slathered in high-fructose corn syrup-based ketchup! In fact, supporting  ranchers – who nurture the landscapes they manage holistically –  directly addresses the issue of climate change and improves the situation, leaving the community more hopeful and the land and animals more carefully attended to. To see how holistic planned grazing actually increases the carbon in the soil and sequesters it from the atmosphere, watch the short video below. Next time someone offers you fake meat or criticizes your urge to grill a hamburger, ask them these simple questions: “How does your food improve soil health?” and “What does your food eat?” 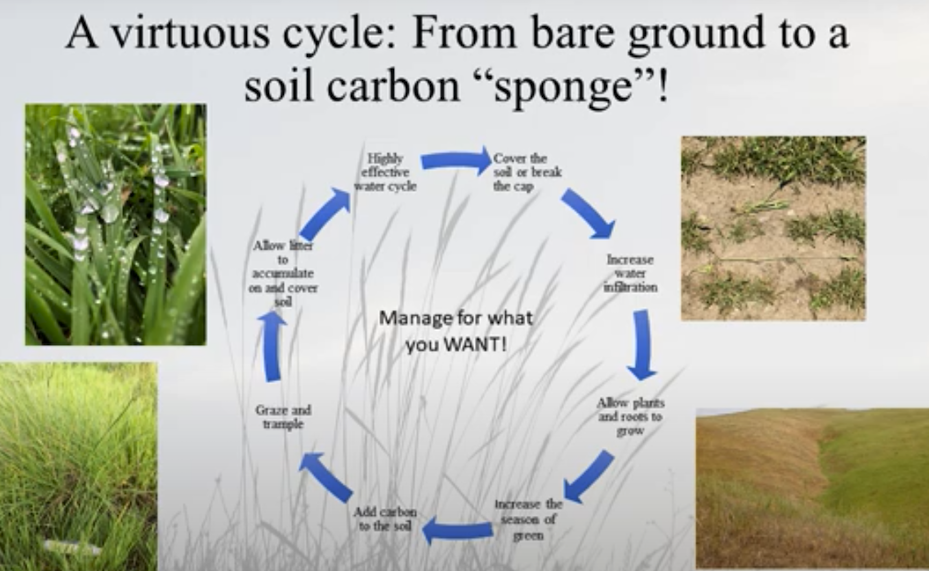